Shoot a computer, shame your daughter and drag kids around so they can really learn: or other ways to stupidly parent

There is a man named David Hughes who has shared a picture on Facebook that has gone viral. Judging by the comments, it is only going to gain in popularity. I am sure that Mr. Hughes is a nice man, with strong values and this post isn't about him. I simply wanted to give him credit.

Recently there was another viral video that went around facebook. You can watch it at the end of this post. Warning: NSFW language. 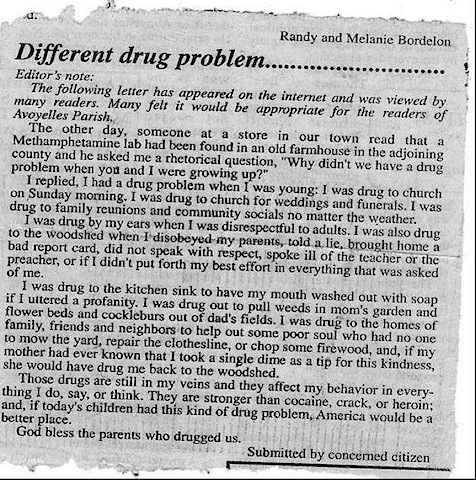 I hate these types of things. I understand them, but I hate them.

I detest the picture (seen above) because it perpetuates the myth that violence is the only way we can shape our children. This is wrong. It also perpetuates the lie that 20 years ago, or 30 or 40 or however many ago, you were "drug" around there wasn't a drug problem. Kids were all well behaved. They certainly were not like kids today! Champaign fell from the heavens, stars burst into firework displays, flowers burst forth from the ground as everyone walked to church and wholesomeness. The reason for this social Utopia? Well, because we could beat our kids if we needed to do so, of course!

Can I use a good country term for a minute? Hogwash!

We have enough violence for children today. Here are some sobering statistics:

All of these numbers are taken from the web-page, childhelp.org.

We have enough violence. We don't need more. We don't need to drag anyone. Does anyone remember the seventies and eighties? We had drug problems then too. We had kids out of control then too. Mostly because society didn't want to do the hard work of actually parenting. Do we need to discipline our kids? Of course. I'm not advocating for some type of free for all, do what you want world.

But, I am advocating for...no I am begging for people to stop glorifying violence and shame as a necessary means of discipline. That's my problem with the video below. He's trying to shame his child into a better way of living. He's throwing a temper tantrum. He's saying, "You hurt me, you shamed me so I'm going to repay your evil with evil of my own and it's OK because I'm the Dad." That's wrong.

Let me be clear, I am not against him shooting up the computer. He's an adult (despite his infant like temper tantrum) and he seems to be more than capable with the gun. I have no problem with that. He owns the computer (I assume) and he can do with it as he sees fit. He can take it from her and set if on fire for all that I care. But, and this is important, he crossed a simple line when he made it into a video so he could shame her. His actions demonstrate that he is more interested in humiliating her than he is in actually teaching her.

Let me also say that I don't know this family but I wonder where he thinks she got her values (remember our children learn the values we live, not the ones we speak). I wonder why he thinks he can't get up and get his own coffee or clean up the mud that he drags into the house. He laments her cursing as he curses throughout the entire post.

What really bugs me about this post is that my friends who claim to be followers of Christ think this is a good idea. They hold this video up as some sort of parenting virtue. When God wrote don't repay evil with evil, He either meant it or he didn't.

Was this girl wrong? Yes. Was he wrong too? Yes. There must be a better way to raise children. He's teaching that it's OK to be disrespectful if you are the one in authority. It's OK to be a jerk if have the power. This is wrong. It goes against the way of Jesus and it goes against effective parenting. Her wrong doesn't make his wrong right.