It's not what happens, it's how we attach meaning that matters

I was talking to a seasoned couple the other day. They were relaying a story that had happened to them in their everyday life. 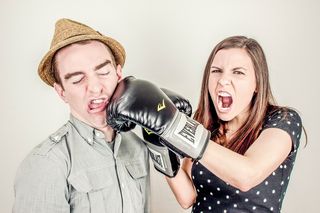 They were laughing about it.

I asked them if they understood how many couples would have been fighting over the very same thing that they were laughing about.

The husband looked at me very seriously and said, "Yes, I know. My brother and his wife got divorced largely over issues that my wife and I laugh about."

One of the most important things that we can consider is the fact that often what happens is less important than the meaning that we attach to that event.

This is most easily seen with couples when someone does something that they believe will be important to their partner and yet the partner does not view it that way.

The event happens but both partners view it differently.

This can also be seen by couples who have something happen and one person interprets it as bad, while the other sees it as just normal, everyday life.

Last night my wife was frustrated. Our two year old had lost her phone, while one of our older children had allowed him to play with it. Understandably, her sentences were shorter than normal.

I can get this way around payroll time. If you own a small business, you know that payroll can always be a stressful time. The question though is, does my wife apply special meaning to my general malaise?

Let's break this down.

This is why most fights are unproductive. Couples spend time trying to dismiss why theother person feels the way that they do. They use energy to destroy the other person's position instead of trying to understand how they came to that position. It's not what happened but what you believe about what happened that matters most.

Let's say that Ruby comes home from a long day of work stressed and grumpy because it was a long day. She says to Ricardo, "Did you take the trash out?" in a voice that he interprets to mean that she is mad at him.

So he has an entire conversation in his head with her where he ends up yelling or shutting down.

Then he takes that conversation out of his head and puts it into the real world. Ruby is shocked and hurt that he would be so angry with her when she isn't angry at all. She just wanted to know if he took out the trash or if she should take out the trash.

And now the fight is on.

They could have lived in the uncomfortable space of knowing that she was mad, but that it would be OK.
No emotions needed to be plundered.
I'm going to continue to explore the principles around this in the upcoming days and weeks.