Points to Ponder: 100 words or not

Being hurt by someone is not an excuse to hurt someone else. We have very little control over the hurt that is inflicted upon us but we have 100% control over what we do with that hurt. Do we turn it into motivation for something good and redemptive or do we revel in it, making it our identity? The choice is ours. We don't get to not choose. Not choosing is choosing. We can and must find a way to overcome.

Is is better to stay together for the kids?

If you've not read the book, The Unexpected Legacy of Divorce, by Judith Wallerstein, I would highly encourage you to do so. Not every marriage can be saved. I get that.
But there are many that can. People stop because it seems easier to get divorced. Those consequences seem more palatable--severe and difficult for sure--but still more palatable.

Getting a divorce is hard.

But we tell ourselves lies. We tell ourselves that staying together for the kids does as much damage as getting divorced. There is very little reliable to data to suggest this is true.

This doesn't mean you should stay with someone who is abusing you or your children.
This doesn't mean that every marriage could be saved. I know that some people are put into a position by their spouse that they have to seek a divorce.

I'm not blaming you.

Divorce has a negative impact on our children.

Until we accurately diagnose a situation,  we cannot treat whatever the negative consequences are from that situation.  If you have had to get a divorce, seek some time with a therapist. Find someone for your children. Join a support group.

Like an injury to your body, many emotional injuries can be healed. Wholeness can be found.  The world is full of hurtful truths. Ignoring them doesn't change them.
Healing comes from accepting them.

The following is a great quote from early in the book.

One of the many myths of our divorce culture is that divorce automatically rescues children from an unhappy marriage. Indeed, many parents cling to this belief as a way of making themselves feel less guilty. No one wants to hurt his or her child, and thinking that divorce is a solution to everyone’s pain genuinely helps. Moreover, it’s true that divorce delivers a child from a violent or cruel marriage (which we will soon see in Chapter 7). However, when one looks at the thousands of children that my colleagues and I have interviewed at our center since 1980, most of whom were from moderately unhappy marriages that ended in divorce, one message is clear: the children do not say they are happier. Rather, they say flatly, “The day my parents divorced is the day my childhood ended.” What do they mean? Typically parent and child relationships change radically after divorce—temporarily or, as in Karen’s family, permanently. Ten years after the breakup only one-half of the mothers and one-quarter of the fathers in our study were able to provide the kind of nurturant care that had distinguished their parenting before the divorce. To go back to what Gary said about his parents being “offstage” while he grew up, after a divorce one or both parents often move onto center stage and refuse to budge. The child becomes the backstage prop manager making sure the show goes on.

Your Marriage is Mortal, It can die. You Can Keep It Alive

I recently had a conversation with a friend of mine. I told him that all marriages are mortal. He immediately became offended and said, "No way! My marriage is not mortal!"

I laughed at him and said not only was his marriage mortal but that if he didn't recognize that fact and act accordingly it would increase the chances that his marriage could become sick or die. Of course, this was met with more angst. We ended up having a great conversation. He may or may not comment on this post, I don't know.

Whether we want to admit it or not, our marriages are mortal. Everyone's marriage is mortal. It does not matter how much you want to say that you will never get divorced or that your marriage will never die. It could and we have less control over than we'd like to admit.

There is a hard reality about marriages. For every 100 couples that gets married this weekend better than 50 of them will end up in divorce. Every one of them thinks that it will be someone else.

I think that many people think that as long as they refuse to acknowledge the D word everything will work out. I admit I used to think this way. There is at least two problems with this type of thinking.

First of all, a marriage requires two people to work on it. A person I know once said that marriage is something you possess and do. The trick is you don't possess it or do it alone. You do it with someone else. Sadly, that person can decide to walk away and there may be nothing you can do about it.

A second problem with this line of thinking is that it does not allow you to look realistically at your marriage. To say that our marriages cannot die is a lot like saying that our bodies cannot break down. It just isn't based in reality.

When we say our marriages are not mortal, we can delude ourselves into thinking everything is OK when it is not. Worse, we can become too scared to admit that we have problems in our marriage. This fear may prohibit us from seeking professional help in counseling for our marriage.

The truth is your marriage, my friend's marriage and my marriage is mortal. They can all die, which is why we must be vigilant in protecting ou

r marriages. We must cultivate them.

Admitting that our bodies are mortal does not mean that we want to die prematurely. The same is true for marriages. When I was married I made a promise to stay that way until death separated us and I meant it.

Denying that my marriage is mortal doesn't make that promise any stronger. It does not make my marriage stronger, in fact I think it makes it more vulnerable.

"Resilience is distinct from mere survival, and more than mere endurance. Resilience is often endurance with direction. Where are you headed? Why are you going there?" (26)

We are hardwired to connection from birth.

Researchers have found that "all scientific research now shows that from a time a baby is born, a baby's brain is biologically already formed to connect in relationships."

"Great endeavors are usually fueled, at least in part, by an irrational passion. Let's not glorify irrationality, but let's recognize that if you look rationally at the odds of succeeding at anything worthwhile, you'll often end up with a rational decision to surrender. To go on anyway, you have to be a little crazy." 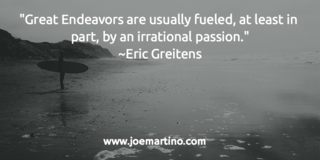