Things I Hope My Kids Learn: You are not the sum of your mistakes. #66

This is the first in an ongoing series entitled, Things I hope my kids learn. This is number 66. The numbers have little significance but they do provide me a decent way to track each one.

One of the most common things I see in life is people enslaved by their mistakes. 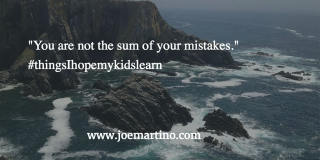 The young father with a criminal record, fears to ever take a chance because of a mistake when he was 18. The young mother who fears loving again because he baby daddy left her.

The middle aged person who over reached and now lives in fear of trying again.

The stories go on, wandering a long and meandering path.

Too often I see people who simply can't past their own mistakes. There's a guy at the gym where I work out who told me that he has been in a violent and bad relationship for 25 years because he cheated on his wife with the woman he was in relationship with now.

That's the definition of being enslaved.

I pray my children learn that their mistakes do not have to define them.

But what about you? What can you and I (and for that matter our children) do with the mistakes that have happened?

Mistakes can rob us of hope. Instead of looking at them as something bad, I'd love for my kids to come to the place where they celebrate failure as a means to gain knowledge and wisdom. Of course, that means that I too would have to come to a place used to failure and mistakes.

That may be the greatest trick of all.