If you want to start something new, you'll need to stop something old

I often meet people who tell me about their wishes.

Sometimes, they call these wishes goals and I call them wishes.

They want to do this thing they're talking about.... 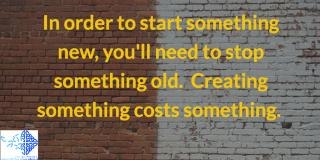 ....do something they are not currently doing.

When I ask them what is keeping them from doing the thing they want to be doing, I usually hear one of two things. Sometimes, I hear both.

"I don't have the time," they say with dour seriousness.

"I don't have the resources," gets expressed with equal chagrin.

I often find that people fail at starting something new because they are unwilling to say no to something that they are currently doing but find unsatisfying.

You want to have a family? Well, that's going to impact the amount of times you can hang out with your "bros".

You want to get healthier? Well, that's going to force you to change your eating, and sleep habits.

You want to have an intimate relationship? Well, that's going to force you to change how you draw your boundaries and deploy your personal amour.

No matter what you do, you'll have to stop doing something else.

I have found it helpful to judge people's seriousness about an endeavor by making one seemingly weird suggestion.

When they suggest to me that they are under-resourced, I'll suggest they cut their cable or phone bill.

The reactions are almost comical.

It's as though by suggesting they cut out their cable that I am asking for a limb.

"But, if you're going to get where you want to go, you'll need to change something," I prod. "What do you want to change?"

The journey from where you are to where you want to be is going to be hard.  Everything in life worth having is hard.

Life is hard because it's supposed to be hard, because that is how we learn.

Here's another truth for another post but remember that today what you do is because you're choosing to do it. If you don't like the results you're getting, start making plans to make different choices.

Four Levels of Friendship and Conflict.

"We need to improve our communication." Sarah*

When I asked her what that meant, she told me that she and her husband Ryan needed to be able to talk in a way that didn't lead to stress between them.
I followed that question up with what made her think that their communication needed improvement.
Ryan jumped in, "Because we get frustrated and mad with each other!"

"But what if that's good?" I replied.

And we had to end the session by calling the ambulance as they both broke their jaws on the floor at the idea that a therapist could think frustration and conflict was a good thing.  (I kid).

I still believe this to be true. In fact, I think we can figure out how intimate we are with someone based on how much conflict we wade through with them. I know some people will be and are put off by the idea that friendships can be put into levels but I am uncertain how else to process what is the difference.

The key to this is processing our emotions and the conflict that arises from them well. And as Sarah and Ryan eventually learned we have to make peace with the idea that being stressed isn't bad. We also have to change the goal of good communication.

What about you? Who do you have in your life that you are truly intimate with?

*Sarah is a made up character that is an amalgamation of many clients. Indeed all characters in this post are made up and they all

Recently a friend of mine had a firestorm of conversation erupt on a post she made on social media. Few of the contributors stopped to consider what lens they were using to understand the post and how that was impacting their statements.
While there were many words, there was little communication.

Watch this video to learn a tool that will help you to avoid the trap of many words and little communication.  Understanding what is going on in your own brain and emotions will help you be a better communicator.

Posted at 11:54 AM in Communication, Relationships | Permalink | 0 comments

Things I Hope My Kids Learn: If you Don' Like Your Life

I consistently run into people who dislike their life 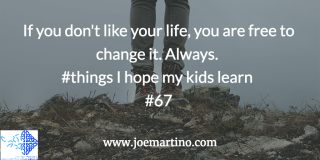 Usually with a passion.

And yet, they make zero changes.

They do the same things over and over again.

As if their life is written out for them and no matter what they attempt, they are stuck living a life they hate.

This is patently false.

We, you and I can always change our life.  The problem is that change is often hard

Most people resist that pain choosing rather to wallow in the pain that they are familiar with over the potential pain that they do not know.  This resistance to pain of any kind becomes  muscle memory and it simply becomes easier to avoid it.

But this resistance to pain comes at a new price. The person becomes stuck in their life that they hate. But stuck is the wrong word because it implies some sort of outside force keeping them from achieving their desired outcome. Most of the time, the outside force is us.

There are three simple questions everyone must ask of themselves if they want to experience change.

And so I say to my children, and you...indeed to myself, if we don't like the situation we are currently in, we are free to change it. Always.

Posted at 11:15 AM in Family, Parenting, Things I Hopy My Kids Learn | Permalink | 0 comments

This video is from my YouTube page regarding ways every conversation can be improved. Conversations about conflict can be hard, and this won't make them easier, but it will give help you make it more productive. Watch it and let me know what you think.

Posted at 08:06 AM in Family, Relationships | Permalink | 0 comments