Joe Martino
Start Here About Blog Buy my book Podcast Hire me to Speak Twitter YouTube Contact Marriage Conference
Goals: Why most don't work and how yours can
Forgiveness and Process: Who are you becoming?

Square or Circle: Finding Peace in a world that can feel out of control

Have you ever been frustrated with someone doing something that you didn't want them to do?

Have you ever searched every crevice of your brain to try and figure out a way to say something to someone so that they wouldn't act in a certain way toward you?

Maybe you wanted to understand how to talk to them so they wouldn't get mad. 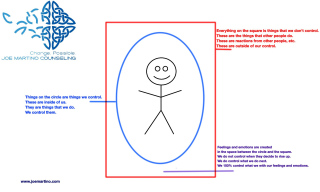 Maybe you wanted your teenage son to understand the importance of taking his dirty dishes out of his room.

Maybe you wanted your parents to understand how they hurt you.

Whatever it is, if it didn't work, I'm guessing, you were frustrated. I want to share with you something that may help alleviate that frustration.

Find a piece of paper.

Now, consider this: Everything on the square happens to you, but you have little to no control over it. When your partner does something you don't like, that's on your square. If you try to have a conversation with them about your sex life and they start to yell and get mad? That's on your square and their circle.  You're not responsible for how they act or react; they are.

How you act is on your circle. You are 100% responsible for how you act.

Most of the time, when you try to control something on someone else's circle (your square), you are manipulating.

This is often a great source of emotional frustration and angst for people. I will often ask clients, "Circle or Square?" when they are talking about a frustration.  The question is designed to get them to explore what they control or are trying to control.

Too often, people will be at one end of two extremes.

The first end is, "I must be doing it wrong, because my husband always gets mad no matter what I do or how I say it." The opposite end is "What my husband is doing is wrong therefore I have an excuse for my poor behavior."

Both extremes are wrong.

Simply because your spouse feels angry with you or reacts poorly to something you've done does not mean that you've done anything wrong. Yes, you can and should examine how you approached the issue. You can even ask them how you might have said whatever it was you wanted to communicate in a way that they would not have been upset/angry, etc over.

Conversely, if your spouse is engaging in poor behavior, that's on their circle (they're control) and your square (not your control.

I am always amazed at people who would never accept, "Well, they did it first" from their children and use the same excuse for why they treat their spouse poorly.

A natural question is what about feelings?

Feelings live in the place between our circle and square. We don't often control their creation. They happen faster than we can process.

So the next time you are frustrated or angry, ask yourself if you're trying to control something that's on your square or circle.

If it's out on the square, you're probably going to be stuck for as long as you try to control it.

So much of our energy is spent trying to control things we do not and cannot control that we fail to utilize the energy we do have to control our own lives.

If we want to find true satisfaction, we will have to start with controlling the things we control and accepting the fact that we don't control everything. Energy spent trying to control things we can't control is energy wasted.  Energy wasted will not move us toward peace.

Find some time today, make your lists. Examine what's going on in your life. What do you control? What don't you control?