Joe Martino
Start Here About Blog Buy my book Podcast Hire me to Speak Twitter YouTube Contact Marriage Conference
Your life is written by the choices you make: Thoughts provoked by Hamilton the Musical
Responding to COVID-19. Dealing with the anxiety.

Let's end the diseases of complaining and gossip 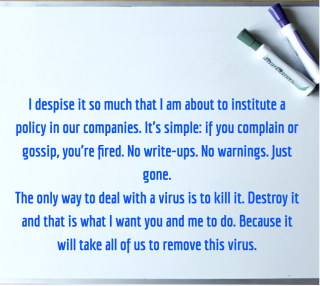 I've never met Pink. You know, the artist. She came to our little corner of the world for a concert a few years ago and I wanted to take my daughter but it was on one of my busiest nights of the week for clients and I couldn't move them all so we didn't go.

Last year, someone somewhere was barking at her and her husband about something. And Pink responded. She challenged everyone to go one day without criticizing anyone.

Today, I'm going to raise her. I want to eradicate gossip and complaining. No, seriously, I want to wipe it out like a bad virus.

Because that is what complaining and gossip are: a nasty, relationship killing virus.

I despise it so much that I am about to institute a policy in our companies. It's simple: if you complain or gossip, you're fired. No write-ups. No warnings. Just gone.

The only way to deal with a virus is to kill it. Destroy it and that is what I want you and me to do. Because it will take all of us to remove this virus.

So let's define these cousin viruses. Gossip and complaining are talking about a problem that you see with someone who cannot fix it or help you solve it.

It is so easy to be the victim.

I saw this all the time when I worked at a local mental hospital. People who were almost always late for work would complain when they were written up.

They would become the victim when they were fired.

I've seen this pattern repeat as a business owner.

I've even heard stories about employees who wanted to pick who they talked to because they "didn't want any feedback, they just wanted to be able to share their thoughts."

That's the heart of complaining.

This doesn't mean that I think we shouldn't address concerns and discuss things that we see that need improved. I believe the exact opposite.

We need to discuss problems. We need to address areas that can improve. I have built my entire career and my family system around the idea that everyone wants to be heard.

But being heard doesn't mean that you get your way.

Recently, I was doing a consultation with a company where there was some strong conflict between management and the employees...well, really one employee who was somewhere more than an employee and much less than ownership. He was in middle management.

He had ideas on how they could improve the overall business. But he didn't have the whole picture. If had had, he would have understood why management couldn't do what he wanted.

The temptation for many people in that situation would be to complain and gossip. To his credit, he didn't.  That's the culture I'm going for both in my personal life and in my companies.

So I've developed some questions for myself over the years to deal with potential gossiping and complaining in my own life. They are as follows:

I really believe that we could remove grumbling from our own lives if we committed to it. Let's do it!