Joe Martino
Start Here About Blog Buy my book Podcast Hire me to Speak Twitter YouTube Contact Marriage Conference
Maybe you should walk away from Facebook for a second.
Do these ten things to have better conversations

Those who disagree with us are not our enemies.

"Can I ask you a question?" This question about asking me a question came at the end of my session with Joshua.*

"Sure," was my quick response. Questions at the end of a session can take many forms. They can range from personal to professional sometimes circling back to a moment in the session and sometimes feeling as though they came from nowhere.

Joshua cleared his throat and asked, "Are you a Trump supporter?"

Welcome to the where did that come from category.

"What does that mean? How would that impact your therapy?"
Something of a blank face stared back at me. Well, I mean I think there is a difference between being a Republican and being a Trump supporter. He's been so mean and the things he says..."

"Well, I have a friend that is a surgeon and he's a huge Trump supporter if you needed surgery would you not want him to do it?" I asked.

But I was sad.

I was saddened by this conversation, not because I necessarily think Josh is wrong for asking it. I'm saddened because we've come to the place where we struggle to be friends and interact with people who think differently than we do.

We've come to the place where anyone across the aisle is not just wrong, they are evil. Don't believe me? Ask someone who supports more liberal ideology about Trump or ask someone who supports Trump about Nancy Pelosi. Find two people who disagree about the efficacy of cloth face masks or whether or not the nearly nationwide quarantine was necessary. Sooner or later one or both parties will just dismiss the other person as evil.

Both sides will invoke their own moral superiority.  The other side just wants people to die.  Why can't the other side just be less selfish and see the value in sacrificing for the good of _____________? Depending on who is talking, you'll need to fill in that blank.

I used to think this was just the bane of my friends who were on the right. I believed this because I heard my friends on the left talk about tolerance and I naively thought they meant it.

We have simultaneously positioned ourselves as the moral and intellectual superior person in almost every debate and elevated feelings to the place of logic.

The result is the mess we have in our country when it comes to politics. And if right now, you're more interested in understanding how this post applies to those you disagree with than it does to you, you're failing this very short pop-quiz. 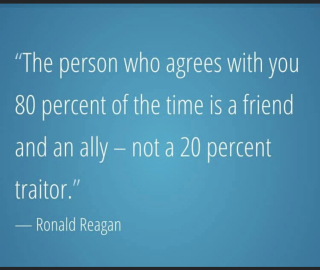 We've simultaneously tried to legislate conflict and disagreement from our society. We've failed.

We have to develop the ability to hold two things in our minds at once.  I pray that we return to being people who value questions. We need to step away from our identity politics and embrace that those who disagree with us are also people just like us.  We have to fight against our normal nature of craving certainty. Certainty is good until it becomes the thing destroying us.  There is no such thing as a life or a relationship without danger and disagreement.

Conflict and disagreement are necessary for healthy living and healthy relationships. May we actually embrace tolerance as a virtue for our living and not just something we demand of others.

By not engaging in conflict and disagreement we haven't actually solved anything, we've just allowed our muscles necessary for those endeavors to atrophy. And that atrophy is killing our society.

We have to slay the dragon of all or nothing thinking. The idea that someone must agree with 100% of the time or they are a traitor to our humanity is devouring our world. We need heroes to stand up to this pandemic. We need warriors to raise swords of truth and be willing to question the narratives being force-fed to us.

Seek out friends that disagree with you. Converse with them. While you're doing with that, look for all of the ways you agree and connect.

Our world will be better when we learn that a Trump supporter can be good friends with an Obama supporter.

So what do I tell my clients when they ask me who I support. I don't. Instead, I tell them that I support the Constitution. I evaluate Presidents from looking at their policies. I have never met a POTUS, so I have no idea what I think of them as a person. I do know what I think about their policies.

I'd like to think that I could have dinner with both Trump and Biden. And perhaps, all three of us would leave that dinner better for the interaction.

Those who disagree with you are not the enemy. That idea is the enemy.

Let us all be better.

*Not his real name. Nor is he the only one to ask similar questions.