We must distinguish between disagreement and attack

I am afraid we have lost the plot when it comes to human interaction.

We have somehow come to the place where we take almost any and all criticism or disagreement as hate or attack.  Think that hot dogs are the best ballpark food and someone offers up nachos?

You can dismiss them as a hater. Or better yet, just call it an attack. We no longer seem to be able to handle having our opinion questioned. Perhaps, because we've come to the place where we all believe that we are subject matter experts in almost everything.

With a few clicks on our keyboard, we can all have an "informed expert" opinion. 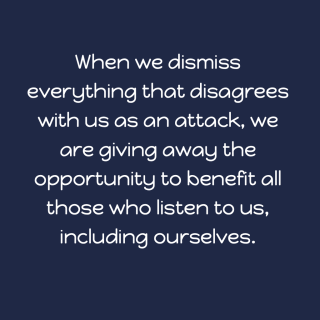 Perhaps, because we've been spoon-fed that whatever we feel or believe is both legitimate and accurate, no matter what contrary evidence may exist.

Perhaps, because we all like to whine a little bit. I was talking to a fifteen-year-old about this idea. One of her statements rung louder than others to me. "Everyone has somewhere that they want to complain about how much harder their life is than another person's life. Because being a victim or a martyr is just appealing to everyone on some level."

I think that might actually be closer to the real reason than anything I offered above. Because to some extent, they all lead to her idea.

We are all tempted by greed and narcissism.  I know that idea isn't popular today but we have to see the complexity in humanity which means that we have broken and whole parts. Ignoring the broken parts is detrimental to our overall health.

If we are going to be healthy people, we must distinguish between attack and disagreement. And I think this is a need on both sides of the communication. Let's talk about both sides for a moment.

The person speaking should:

The person listening should:

When we start seeing the difference between disagreements and attacks, we open ourselves to the best possibilities of growing and maturing. We give ourselves the best chance to have true community and intimacy.  Very few people like being told they are wrong but the best communicators embrace the reality that they may be wrong. They embrace the value of someone pushing against their beliefs.

This doesn't mean we have to engage in every conversation that is disagreement. Sometimes, it makes sense to just step away from a conversation.

This is especially true in times of fear. As our fear kicks off, our reasoning processes tend to shut down. They're not needed in flight, fight or freeze mode.  But that can be hurtful to our emotional health.

May we all engage in behaviors that build each other up.

There was an ancient writer who wrote that we should only allow words to come out of our mouths that will build others up and benefit those that are listening. I dream of a society where that is the normal way. When we dismiss everything that disagrees with us as an attack, we are giving away the opportunity to benefit all those who listen to us, including ourselves.