Joe Martino
Start Here About Blog Buy my book Podcast Hire me to Speak Twitter YouTube Contact Marriage Conference
Do these ten things to have better conversations
Dealing with the loss of loved ones. Grief hope and our mired mess of emotions

Wring every ounce out of your talent and opportunity. Thoughts on the Last Dance Documentary

Recently, my dad and I have been having a phone conversation about the documentary on ESPN regarding Michael Jordan. If you haven't seen it, it's called the last dance. This was the name Phil Jackson gave his plan for the final season together. A little hug, the general manager of the team at the time.

My dad asked what did it matter that Michael Jordan was perhaps the greatest basketball player ever to play.  He wasn't trying to deny Michael's greatness; he was just asking what it meant in the light of the world around us. 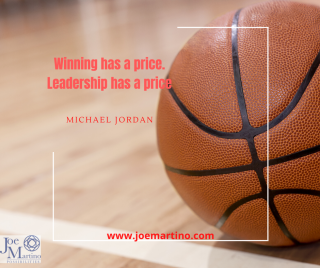 The show does an excellent job of showing just how hard Jordan worked and how hard he pushed his teammates. One of the questions raised in the show is was Jordan too hard on his teammates. Was he too mean? And then, my dad asked why I thought Jordan didn't see the same success as an owner that he saw as a player.

I'll leave that last question for another day. But, I do want to address the value that I think Jordan and athletes like him can bring to our lives.

I will admit that I am a Jordan fanboy. I remember watching him do things that just seemed impossible. My high school basketball coach and history teacher would come over to our house, and we would all sit in the living room and watch him play. Often, in the playoffs, this was painful for me as a Knicks fan, and yet, I loved to watch him play

I think one of the most amazing things that Jordan teaches us is the importance of wringing every ounce of possibility out of our talents and opportunities. One of the things that he seems to have done was to elevate himself and those around him to put everything into winning. To leave the entirety of their talents in the game. To risk loss by giving everything to win.

So often today, we seem to want the glory without the work. That is probably not a new affliction for humanity.

Jordan did something that we may never see again. Like most successful people, his detractors, and those who hate him. In the documentary, since I heard it. He states, "Winning has a price. Leadership has a price."  He always seemed willing to pay that price.

Jordan, the player, is an example of someone who took every opportunity to get better at his craft. He worked tirelessly to improve his game. One of the controversial things that he did was leave basketball to play baseball.  Because of media constraints, he ended up playing at a level higher than new players would normally begin playing. He started the season with a 15 game hitting streak. Then, he had a long hitless streak. Like many minor-league players, he couldn't hit the breaking ball.

If watching an athlete perform at the highest level inspires us to have a work ethic like that, then I believe sports are improving society. I think inspiration like that is worthy and noble of our attention.

And, like all heroes, Jordan can be a cautionary tale. His life directly contradicts our desire for all or nothing thinking. He's not all good or all bad. He's human. He has flaws. Some of his greatest strengths throughout his life have also caused some of his most significant heartaches. And that is probably true for many of us.

I, for one, am glad that I lived within the time he played. I loved to watch him play, and I've enjoyed this documentary. I may even re-watch some episodes. Like most older men, I believe that the era of my youth was purer and more enjoyable than today's era. But that is probably for another day.

I do want to ask you a question that I have been pondering regarding my own life since watching this documentary. How much of your talent are you using? How much of your opportunities are you engaging in? What are you doing to develop your mental toughness and your physical ability? Perhaps the greatest gift that Jordan gives us: he allows us to look in the mirror and measure ourselves. To realize that our actual competition is not the other people in our industry. Our actual competition is to be better today than we were yesterday.

Our greatest opportunities will often come with the greatest possibility of failure. May we engage those opportunities with courage. May we welcome all who come as competition and simultaneously want to beat them.

May we elevate ourselves and those around us to greatness. And may we define greatness as the ability to put everything we have into whatever endeavor it is that we're doing.

May we have the awareness to recognize opportunity when it comes knocking, and in those times when Opportunity finds itself stuck behind a door that does not want to budge may we lower our shoulder and open that door.

May we have the integrity to know that success without hard work is fraudulent.

May we have the audacity to believe that we can always work harder even after we've given our best.

May you, my friend, find success this day.

May you find inspiration.

May you find the courage to do the dreams that scare you.

May you find peace.